#dear theodosia #helpless #hamilton #musical #Entertainment
Satisfied from the Broadway hit musical, Hamilton. "Satisfied" begins with Angelica Schuyler's wedding toast for Alexander Hamilton and Eliza (her sister), then proceeds to rewind and retell the events of the previous song, "Helpless," from her own perspective. In "The Schuyler Sisters" Angelica had said she was looking for a "mind at work", and now found it in Hamilton yet feels complled to give him up for the sake of her sister..
Did you see our Helpless music video from Hamilton?
Lyrics to Satisfied from Hamilton below
Working with Lemons is a family channel. The Sisters in this video are all sisters in real life! Camrey, Ari and Mia Bagley. Come back the last Friday of each month for more videos!
#hamiltonthemusical #helpless #satisfied #schuylersisters
GET OUR SONGS: http://amzn.to/1TYKjSB
visit This is the Place Heritage Park: http://www.thisistheplace.org/
Who thinks there should be a Hamilton the Movie?.
Lyrics to Satisfied from the Musical Hamilton by Lin-Manuel Miranda
Laurens, Alright, alright. That's what I'm talkin' about!
Now everyone give it up for the maid of honor
Angelica Schuyler!
Angelica and Chorus, A toast to the groom.
To the bride.
From your sister.
Is always by your side.
To your union (To the union) (to the revolution)
And the hope that you provide (Provide, you provide)
May you always (Always)
Be satisfied (Rewind)
Angelica, I remember that night I just might regret that night for the rest of my days
I remember those soldier boys tripping over themselves to win our praise.
I remember that dreamlike candlelight like a dream that you can't quite place.
But Alexander I'll never forget the first time I saw your face.
I have never been the same.
Intelligent eyes in a hunger pain fame.
And when you said hi I forgot my dang name.
You set my heart aflame, every part aflame, this is not a game..
Hamilton, You strike me as a woman who has ever been satisfied.
Angelica, I'm sure I don't know what you mean you forget yourself.
Hamilton, You're like me, I'm never satisfied.
Angelica, Is that right?
Hamilton, I have never been satisfied
Angelica, My name is Angelica Schuyler.
Hamilton, Alexander Hamilton
Angelica, Where's your family from?
Hamilton, Unimportant. There's a million things I haven't done..
But just you wait, just you wait.
Angelica, So so so so this is what it feels like to match wits with someone at your level.
What the heck is the catch?
It's the feeling of freedom of seeing the light.
It's Ben Franklin with the key and the kite.
You see it right?
The conversation lasted 2 minutes maybe 3 minutes, Everything we said in total agreement
It's a dream and it's a bit of a dance
A bit of a posture, it's a bit of a stance.
He's a bit of a flirt but I'm-a give it a chance.
I asked about his family, did you see his answer?
His hands started fidgeting he looked he scanned.
He's penniless, he's flying by the seat of his pants.
Handsome, boy does he know it.
Peach fuzz, and he can't even grow it.
I wanna take him far away from this place, Then I turn to see my sister's face and she is,
Eliza, Helpless.
Angelica, And I know she is,
Eliza, Helpless
Angelica, And her eyes are just.
Eliza, Helpless
Angelica, And I realize three fundamental truths at the exact same time.
Hamilton, Where are you taking me?
Angelica, I'm about to change your life
Hamilton, Then by all means lead the way.
Angelica, I'm a girl in a world in which my only job is to marry rich.
My father has no sons, so I'm the one who has to social climb for one.
So I'm the oldest and the wittiest and the gossip in New York City is insidious.
And Alexander is penniless, That doesn't mean I want him any less.
Eliza, Elizabeth Schuyler, it's a pleasure to meet you.
Hamilton, Schuyler?
Angelica, My sister.
He's after me cause I'm a Schuyler sister that elevates the status
I'd have to be naive to set that aside.
Maybe that is why I introduce him to Eliza now that's his bride.
Nice going Angelica, he was right you will ever be satisfied.
Eliza, Thank you for all your service.
Hamilton, Well if takes fighting a war for us to meet, it will have well been worth it.
Angelica, I'll leave you to it
I know my sister like I know my own mind
You will never find anyone as trusting or as kind.
If I tell her that I love him, she'd be silently resign, He'd be mine.
She would say I'm fine.
She'd be lying.
But when I fantasize at night it's Alexander's eyes.
As I romanticize what might have been, If I hadn't sized him up so quickly.
At least my dear Eliza's his wife.
At least I keep his eyes in my life.
Angelica: Chorus, To the groom (To the groom x3)
To the bride (To the Bride x3)
From your sister (Angelica x3)
Is always by your side (By your side x2)
To your union (To the union) (to the revolution)
And the hope that you provide (Provide, you provide)
May you always (Always)
Be satisfied (Satisfied x3)
Angelica, And I know she'll be happy as his bride.
And I know you will be satisfied.
I will never be satisfied. 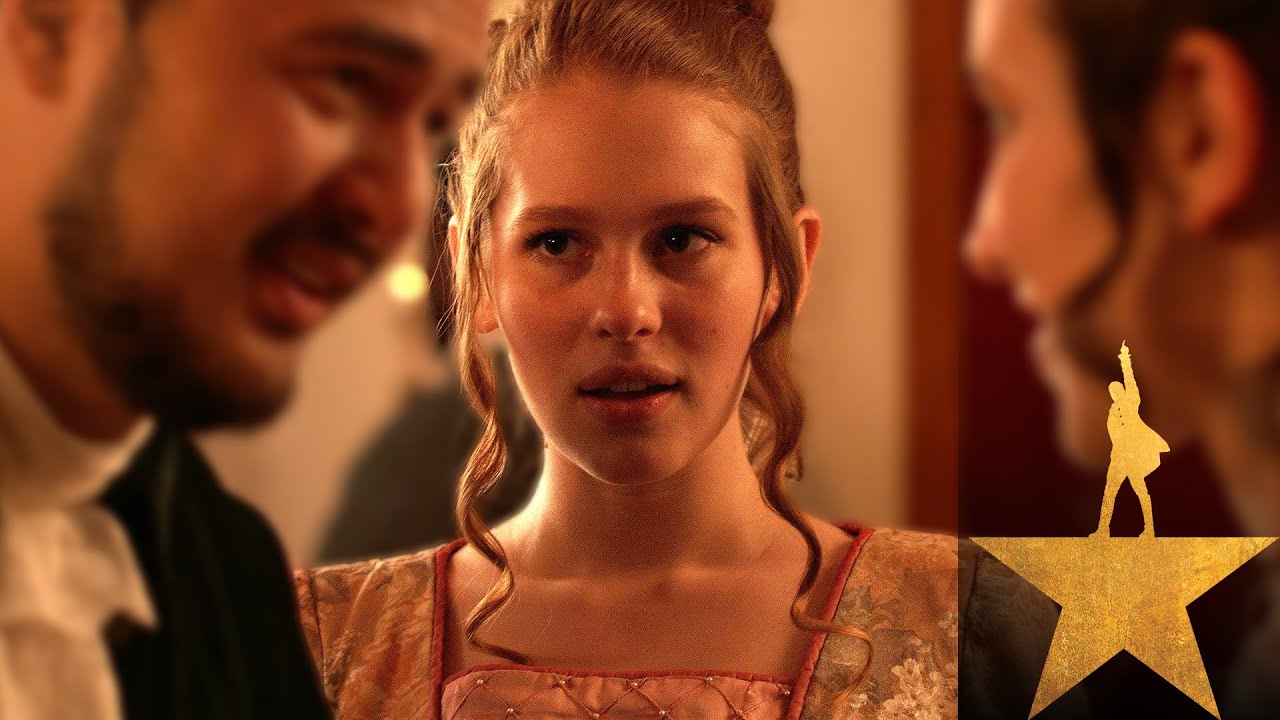