#minecraft hardest difficulty #minecraft impossible fundy #WadZee #wadzee impossible difficulty #Gaming
I Beat Fundy's NEW IMPOSSIBLE DIFFICULTY in Minecraft on my first try! Fundy's Impossible Mode is too easy! About a week ago I made a video "I Beat Minecraft on Impossible Difficulty", the new difficulty in Minecraft created by Fundy. Since then Fundy has created a NEW Impossible++ difficulty for minecraft and claims it is ACTUALLY IMPOSSIBLE! However I managed to beat it first try! That's right wadzee beat the impossible difficulty in minecraft AGAIN!
This is a plugin that makes minecraft EVEN HARDER! Today I decided to take on fundy's challenge AGAIN and beat the "impossible" once again!! If you guys want to see more impossible minecraft challenge videos make sure to subscribe!.
Fundy's Minecraft Impossible++ Difficulty, https://www.youtube.com/watch?v=Z5Y8uwpJrhs&t=24s
Check out the video above to find out how to try Fundy's Minecraft Impossible Difficulty Mod for yourself!
▬▬▬▬▬▬▬▬▬▬▬▬▬.
FOLLOW ME.
▸ Second Channel: https://www.youtube.com/channel/UCnng...
▸ Follow me on Twitch: twitch.tv/wadzee
▸ Follow me on Twitter: https://twitter.com/WadZeeYT
▸ Follow My Instagram: https://www.instagram.com/wadzeeyt/
▸ Follow My TikTok: wadzee
▸ Discord: https://discord.gg/BBvwxen
▬▬▬▬▬▬▬▬▬▬▬▬▬
Email for business enquiries (ONLY!), 📧 - wadzeeytgmail.com
▬▬▬▬▬▬▬▬▬▬▬▬▬
SUBSCRIBE to WadZee to become a LEGEND!
subscribe for more Impossible Minecraft Challenge
I use a bunch of music but a lot of it comes from
Kevin MacLeod (incompetech.com)
Licensed under Creative Commons: By Attribution 3.0
http://creativecommons.org/licenses/b...
Epic TV Theme by Audionautix is licensed under a Creative Commons Attribution licence (https://creativecommons.org/licenses/by/4.0/)
Artist: http://audionautix.com/ 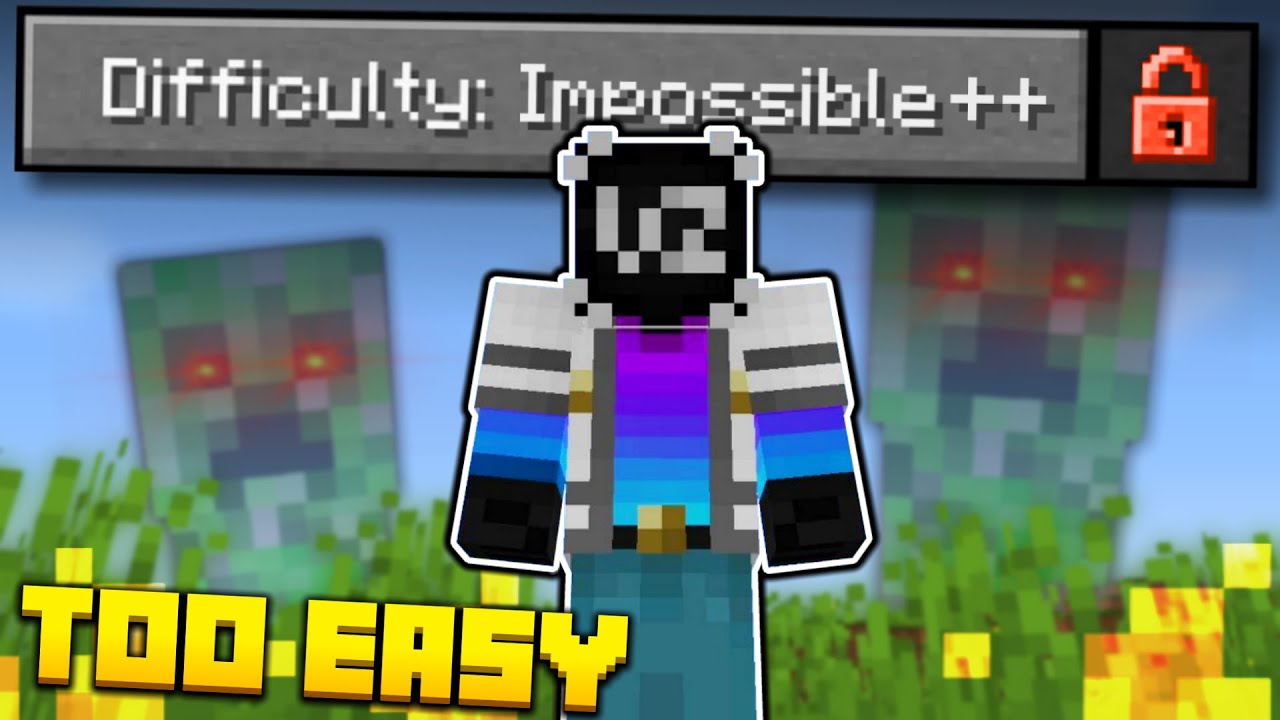 I lose game sound about half way through the video, my apologies, at least my voice is still there!

bro ur a different breed, how tf do u do this without DYING LOOOOOOL

by Bionic 1 week ago

Fundy: "I will make Minecraft Impossible!!!"

WadZee: "Three, take it or leave it"

by DNT Serprimus 6 days ago

The issue with Fundy’s “impossible” Minecraft is that it isn’t actually upping the difficulty. It’s all very artificial, random stuff that just makes it more tedious. If he was to make it more difficult, here is what suggest doing.

He should take inspiration from Minecraft expert mode, to start. Give mobs armor, more health, make them do more damage.

Make zombies go faster, like from those scary zombie movies. It would be even cooler if they could scale walls, and didn’t burn in the day. Make em really scary. And also up their spawn rates so you’re dealing with a lot of terrifying fast zombies.

While we’re on the concept of zombies, take a few ideas from MineZ: bleeding when you take damage has a random chance to happen, and you can get infected and take damage from that too.

The possibilities are endless :)

by Aidan McKenna 4 days ago

wadzee: beats impossible++
fundy: i made a gamemode where air kills you in minecraft

by The Meme Dealer 6 days ago

Him: beats Minecraft in hardcore, impossible and impossible++ mode


Me: can’t even beat Minecraft in baby mode
Edit 2: ok so a lot of people don’t get this is a joke.

by MLC JxckOfficalYT - Funny Videos, Shorts, and more 6 days ago

by Unyloft Production 1 week ago

Me: takes two years to beat the game.


WadZee: beats it in under 40 minutes in IMPOSSIBLE DIFFICULTY

by ashton mclees 5 days ago

by Game Drive Channel 1 week ago

Anyone else notice he sent the “your message won’t age well” at 4:04am

by Asmr Ash 6 days ago

by Diwi Dah Deeka 5 days ago

"i used to be a zombie pigman"
-zombified piglin

by Anh Đặng 1 week ago

He should make an even harder one and call it Difficulty: WadZee

by Natalia Edges 5 days ago

Pretty sure Fundy is too, for different reasons.

by Anonymous Monkey 1 week ago

Also Me:Goes To Get A Pint Glass Of Water.

"You slipped on some moss."

Here's something that'd make sense for the nether:

"You tripped on a fallen soul."

when he says "thats a little funky"

he should say "thats a little fundy"

by Matthew Savastano 6 days ago