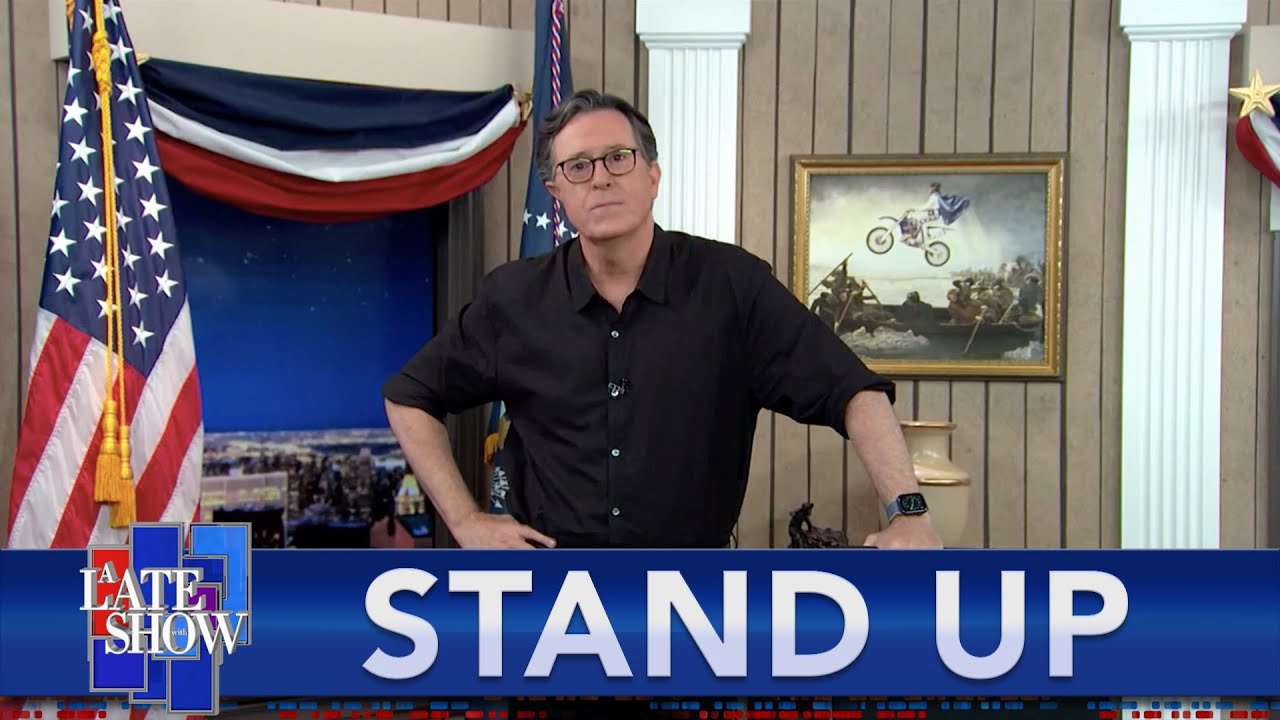 Stephen Rips Up The Monologue And Starts Over... The Late Show with Stephen Colbert photo

Hello everyone,
You know he's serious when he doesn't imitate Trump while reading his tweet.👍👍

by Cooking of Survival 2 months ago

by Ella Ella 1 week ago

My god this hit different on Jan. 7th. A few cowardly Republicans are FINALLY speaking up. That's what it took.

by Jonathan Hrovat 1 week ago

It's really upsetting to see Colbert being serious. That's when you know shit is real.

The photo of Giuliani terrified me more than any horror movie slasher!

I guess that's Stephen's wife who sometimes can be heard laughing. Her laugh makes stuff funnier; it's a happy sound.

by Robert Haskell 1 month ago

And now he incited a revolution, failed, and blames Antifa disguised as trumpist terrorists. I can't imagine what this looks like it n the history books. If we make it.

by B Snowden 1 week ago

Oh Stephen! You haven’t heard of January 6 2021 Maga invasion of the US Capitol yet! Yet you are talking about it. You ARE a prophet! 🧙‍♂️

I can’t get over the crazy religious lady. It makes me nauseous.

by Michael Trimble 4 days ago

I'm from Europe... your election is the most disturbing thing I've seen in a modern, western "democracy".

by Nik Rock 2 months ago

I had to rewatch this because Stephen was so right. Look at all the rats leaving the ship... now. It's too late.

by Patrick Marchand 1 week ago

Something tells me Stephen’s gonna have a FIRE monologue tonight...

by Tom Kline 1 week ago

Thank you for being on this ride with us. You’re how many of us survived!

by Ailsa Ni 1 month ago

"He can suck silence." Perfect.

Everyone knows who Trump is and what he does, that's not surprising. The scary part is that nearly half the country voted for him.

"For evil to succeed, all that's needed is for good men to do nothing" - Edmund Burke

by Freddie Malice 6 days ago

"Don't you hate it when your preacher starts skipping?" Whoever came up with that deserves a prize!

by Alexa Dvorson 1 month ago

Wow, the first four minutes of this video are maybe even more resonant after the sedition attempt.

by Bill Corey 1 week ago

If only you knew. From a New Zealand perspective all the way over here it’s scary to see what’s going on. Wish the USA all the best as you try to recover, re unite and move forward

by Bobby Drake 1 week ago