#aang #water bending #avatar the last airbender #The last airbender #Entertainment
Step inside the pitch meeting that led to Avatar: The Last Airbender Live-Action!
Subscribe for more Pitch Meetings: http://goo.gl/ho3Hg6
For a brief moment in the early 2000’s, people were referring to M Night Shyamalan as “The Next Spielberg.” With popular hits like The Sixth Sense and Signs, it seemed like the director was going to churn out classic after classic. But then came The Village… Lady in the Water… The Happening… Opinions started to change. Then came “The Last Airbender” in 2010, which not only solidified the new, negative public opinion of Shyamalan, but also enraged fans of the animated series around the world.
The Last Airbender definitely raises a lot of questions. Like why rush through twenty episodes in ninety minutes? Why is there so much narration and exposition? Why are everybody’s names being pronounced weird? Why doesn’t anyone have any personality? Why does bending look so weird? What was up with that Earth Tribe scene? Who thought this was a good idea?!
To answer all these questions and more, step inside the pitch meeting that led to The Last Airbender! It’ll be super easy, barely an inconvenience.
Check out the Behind The Screen Podcast - By Screen Rant on Spotify!
https://open.spotify.com/show/6sMJkP1E4N7kPYL5v9OW3v
Check Out These Other Amazing Videos.
CATS Pitch Meeting
https://www.youtube.com/watch?v=XsNAu72v2Yc
Game of Thrones Season 8 Pitch Meeting
https://www.youtube.com/watch?v=jAhKOV3nImQ
Our Social Media, https://twitter.com/screenrant
https://www.facebook.com/ScreenRant
Our Website
http://screenrant.com/ 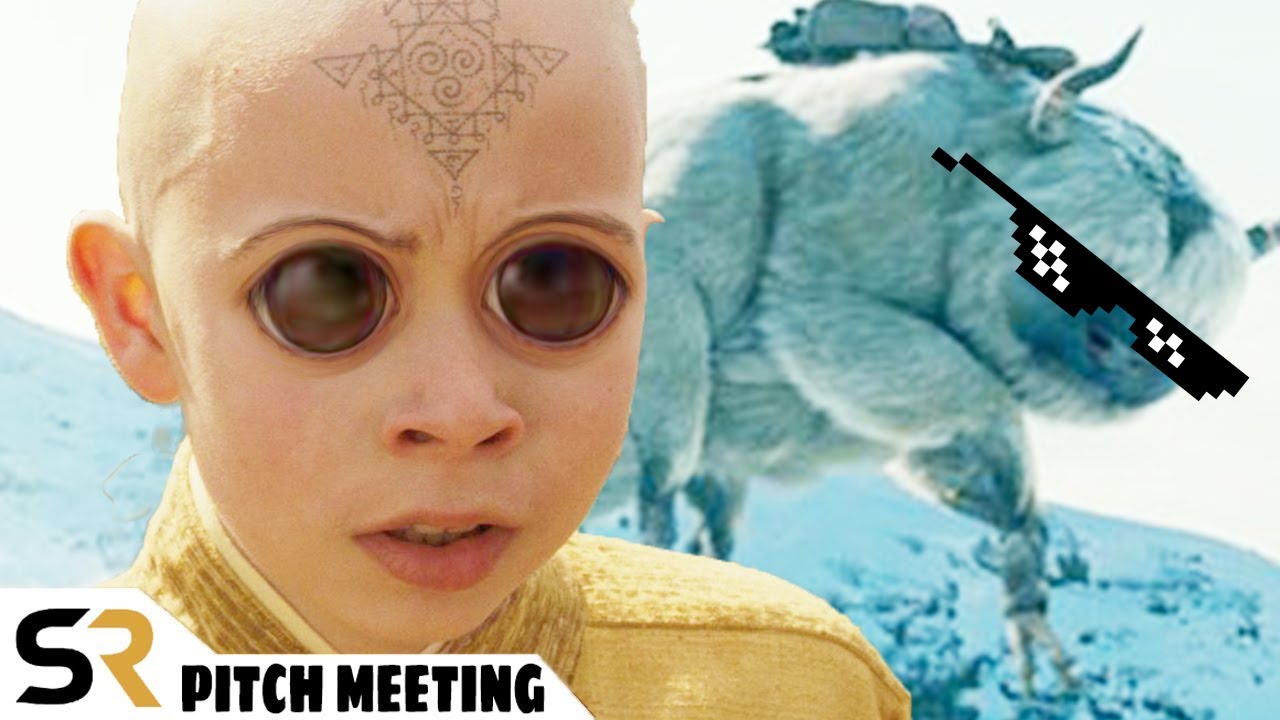 Finally! This movie was MADE for Pitch meetings. (And is of no use whatsoever to anyone else.)

by Ecliptor Calrissian 1 months ago

The pitch meeting is thousand times better than the movie .

by Sai TheSnake 1 months ago

We do not talk of this movie, this movie does not exist.

The Earth King has invited you to Lake Laogai.

by Ruana 4 weeks ago

It's like the worse the movies are the better the pitch meeting.

by Bob Is life 6 days ago

This movie doesn’t exist, we all have just been on cactus juice,
“ it’s the quenchiest”

Avatar the Last Air Bender fans: There’s no way anyone can mess up this perfectly good series.

by That Guy 1 months ago

Can confirm: Not being exiled IS tight.

by Andy Brinegar 1 months ago

“It’s like they say, a thousand pictures are worth a single word”
Actually, in the animation biz, he’s kinda correct.

by Rexy The T. rex From Jurassic park 1 months ago

Writer: Based on the setting, culture, story, style and martial arts, the characters in the series are obviously asians, mostly chinese, japanese, koreans and inuits. But we're not gonna do that in the movie.
Producer: Oh we're not? :D
Writer: No :D We need to represent how the REAL world works. So i figured you know, the heroes are gonna be White. And since i'm Indian, the most powerful nation are gonna be Indians.
Producer: Fair enough! So what happens to these Chinese people that were supposed to run the show?
Writer: They're gonna be enslaved. Mostly helpless and will be saved by the Whites.
Producer: Well alright then! What about the Blacks?
Writer: Oh they're already extinct.
Producer: wowowow wow :D

This isn't the Last Airbender movie, this is Avatar: The Ember Island Play 🤣

by Samantha H 1 months ago

"And the name pronunciations are the same as they are in the show?"

"There's absolutely no way to verify that"

"Princess penis-hair" completely caught me off guard. That was gold Ryan! Gold!

I'm glad they never actually made this. There is no movie in Ba Sing Se...

You forgot:
“Then we’re going to add a ton of awkward close ups of the main characters while they are constipated to make the audience want to get up and leave.”
And
“These characters are all very diverse but screw that we can just hire these white people, easier right?”

by Aleida Ackerman 1 weeks ago

After watching 16 pitch meetings in a row, I'm beginning to suspect that "barely an inconvenience" is a running gag in this series.

by Ryan Stinnett 1 months ago