#matty matheson #matty #pollo verde #pollo #Education
TODAY IS EVERYONES FAVOURITING WEDNESDAY ITS THE EVERY OTHER WEDNESDAY WHERE JUST A DASH COMES OUT!!!! WE ARE MAKING POZOLE VERDE DE POLLO AND ITS MAYBE MY BEST VIDEO IVE EVER MADE BUT I SAY THAT ABOUT EVERY VIDEO BUT THIS ONE IS SPECIAL AND WILL WARM YOU TO THE BONE! ALL OF THE PATIENCE YOU FREAKY DEAKY FREAKS ARE SHOWING BY HOLDING ON IS BEAUTY AND POWER AND I LOVE ALL YALL!!!!! LETS FUCKING GO
https://mattymatheson.store/
https://twitter.com/mattymatheson
https://www.instagram.com/mattymatheson
https://www.facebook.com/MATTYMATHESON1
Applestone Meat Company shops are open 24/7 and sell fresh cut meat from vending machines. All of the meat is sourced from whole animals raised without added hormones or antibiotics by farmers who are committed to their well-being. Find Applestone stores in Stone Ridge and Hudson, New York. More info here: https://applestonemeat.com/
https://www.instagram.com/applestonemeat
https://twitter.com/applestonemeat
https://www.facebook.com/applestonemeat/
SOUP
1 onion, chopped
1 green pepper, chopped
1 poblano, chopped
1 jalapeno pepper, chopped.
1 cubanelle pepper, chopped.
3 celery stalks, chopped.
4 garlic cloves
2-3 tbsp canola oil
1 whole chicken, divided into 8 parts
salt.
6 -8 tomatillos, husked and cut in half
5 cups chicken stock
2 cups canned hominy, drained and rinsed
GARNISH
1/2 white onion, finely chopped
1 avocado, sliced
3-4 radishes, diced
1 cup cilantro, chopped.
1 cup Mexican crema or sour cream.
DIRECTIONS
Place onion, peppers, celery, and garlic in a blender and pulse until smooth. Set aside.
Set oven to broil..
Heat oil over medium-high in a heavy bottom pot or dutch oven..
Season chicken with salt. Place chicken parts in pot and brown, about two minutes per side. Work in batches to avoid crowding the pan.
Meanwhile, place tomatillo halves cut side down in a cast-iron pan. Broil until skins are charred and tomatillos have released their juices, about 5 minutes..
Remove chicken from pot. Add in onion, pepper mixture to the pot. Reduce heat to medium and continue to cook until the mixture becomes golden, about 30 minutes stirring often.
Place the chicken pieces back in the pot along with the tomatillos and all the juices that were released in the pan.
Pour chicken stock into the pot and increase heat to high. Bring to an immediate boil then reduce heat to low and cover. Simmer until chicken is cooked through and tender, about 90 minutes..
Season with salt and pepper. Pour in hominy and stir to warm through..
Divide into bowls and garnish with onion, avocado, radish, cilantro, and sour cream. 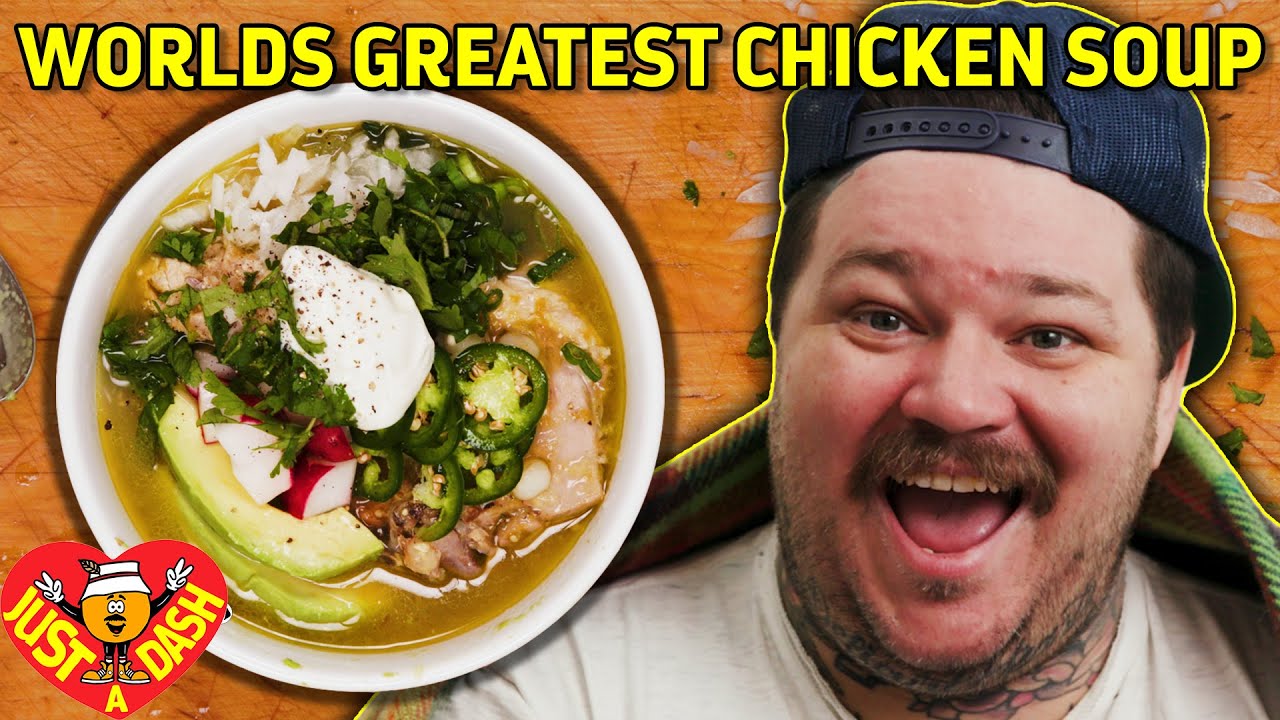 Think how blessed we are to live in a world where we can watch an insane canadian teach us about food from all around the world. Keep it coming Matty.

by Mister Turk Turkle 7 months ago

Proceeds to pour the sofrito into the cleanest pot on earth

by Alexandre Leduc 7 months ago

He's the most aggressive Canadian I've ever seen. He's wonderful.

by syno crat 7 months ago

crew: *sneezes
Matty: "ARE YOU TRYING TO RUIN MY CAREER???"

crew: "Matty, do you want to share how you think the Earth is flat?"
Matty: "If you look out the window, you can see it's flat."

by Ken Ngo 7 months ago

"NO TOYS IN THE KITCHEEEEN!!"
zooms in on a toy dinosaur sitting on the counter

by Chubbz Makenzi 7 months ago

by Sarah Owen 7 months ago

i like how the pot was clean and in oil while he put the sofrito in lol. Tell the production team to chill

by Dirty Sanchez 7 months ago

I think that but plug story is actually real lmao

by Manny Gallotta 7 months ago

Whatever Michelle gets paid, she deserves a raise.

I sincerely hope to hell that Matty is joking about being a flat-earther.

by Colin A 7 months ago

me hitting my shin off the coffee table

by bofooit gojo 7 months ago

i can imagine matty reaching his final stage of insanity chasing people with that cleaver, "YAHHH".

by Charming nowhere to hide 7 months ago

Please make a “NO TOYS in the kitchen” shirt

by Kevin Wetzel 7 months ago

Nothing warms my heart like a Matthew “Matty” Matheson “YAAAAAAHHHHHH!!!”

by Scu Wopp 4 months ago

by Kenneth Webb 7 months ago

Matty sounds like my Dad every time he can't find something in the kitchen (which is 100% of the time) and I have to calmly go in there and get it out of the drawer in front of him.

by Saaz Hussain 6 months ago

Every other Wednesday is my favorite day of the week.

by Jeremy Streno 7 months ago