#people protesting #xi jinping #Carrie Lam #extradition #News & Politics
Recently, there have been massive protests in Hong Kong against a controversial bill, which could force people in Hong Kong to be extradited to stand trial in mainland China. This led to violent clashes between protesters and Hong Kong police. Given the unprecedented public backlash, Hong Kong’s leader, Carrie Lam, suspended the bill, but that didn’t stop nearly 2 million people from hitting the streets on June 16th to demand her resignation. Our Asian Boss team in Hong Kong hit the streets to see how big the protest really was and get some insight from Hongkongers on how they really feel about the whole situation.
The opinions expressed in this video are those of individual interviewees alone and do not reflect the views of ASIAN BOSS or the general Hong Kong population.
Special thanks to our Asian Boss team in Hong Kong.
Christie Lee (Reporter)
YouTube ► https://www.youtube.com/user/wutgaygangsters
Instagram ► https://www.instagram.com/wudgay/
Hayden Lam (Producer)
Michelle Ho (Producer/Subtitler)
Instagram ► https://www.instagram.com/mitchhny/
Skyguy Mok (Videographer/Editor)
Website ► http://skyguymok.com
Instagram ► https://www.instagram.com/skyguy_photography/
Ryan Tsai (Videographer).
Instagram ► https://www.instagram.com/phot.t.t.ography/
Sean Tam (Subtitler)
Instagram ► https://www.instagram.com/seantam_3/
Stephanie Yip (Subtitler)
Music, Hit the Streets (Version 1) by Kevin MacLeod is licensed under a Creative Commons Attribution license (https://creativecommons.org/licenses/by/4.0/)
Source: http://incompetech.com/music/royalty-free/index.html?isrc=USUAN1100881
Artist: http://incompetech.com/
Our vision is to build a lasting grassroots movement of young people from every country to report on real social and cultural issues. We believe having meaningful discussions with people with different opinions is extremely important. We also believe that any ordinary person can deliver real news and commentary. Through our original and in-depth interviews of real people, we will challenge you - the global youth - to think critically and challenge various cultural and social issues. If this resonates with you, try to get involved in any capacity and volunteer for ASIAN BOSS ►https://goo.gl/forms/4IM0VEoFKAB0pJxG3
For business, media or licensing inquiries, reach out to us at askasianbossgmail.com
Are you curious about real people's perspectives from Asia on various cultural and social issues? Subscribe to ASIAN BOSS for more informative and thought-provoking videos ► https://goo.gl/TRcSbE
#ExtraditionBill #HongKongProtests #AsianBoss 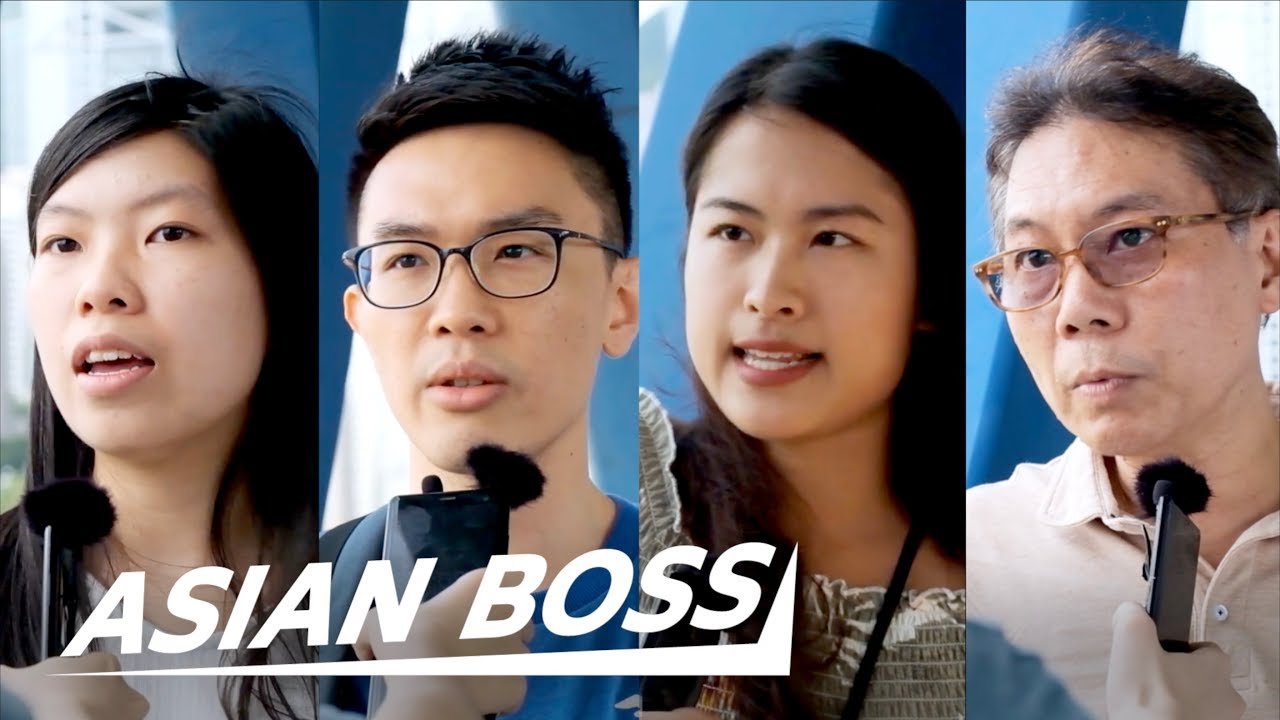 The opinions expressed in this video are those of individual interviewees alone and do not reflect the views of Asian Boss or the general Hong Kong population. We want to thank our amazing group of volunteers for making this video possible. It took a while but we finally got it out! We also want to thank all of our interviewees for sharing their honest opinions, the likes of which you may not see often on the mainstream media. Like I said in the video, Asian Boss is all about creating a grassroots movement to capture the most authentic voices and perspectives from all over Asia. That's why we don't even care that this video is already demonetized, like many of our other videos. Be that as it may, we've got a long way to go, but rest assured that we are busting our asses to expand our coverage as fast as we can. If you want to join the movement, subscribe to Asian Boss and do what you can to help out. Thanks for being a part of the Asian Boss community and stay curious.
- Stephen

by Asian Boss 1 year ago

I'm really stunned at how well-done this video is. Well worth the wait. Everyone interviewed is really well-spoken and well-informed, and the interviewer has good questions and is respectful. While I fully support the protesters, I'm glad you included people who were more supportive of the bill as well. It made for a more well-rounded view. Thanks, Asian Boss!

Doing a similar street interview in mainland China would be interesting to say the least.

by Loh Kim Hun 1 year ago

The way she said “Me me’s” Was cute

by laura gutierrez 1 year ago

"Do you know what a 2-million-people protest looks like?"
I believe we haven't been introduced yet. Hi, I am Brazil!

Asian boss is always giving us that quality content about things we may not know about!!

by Chasity J 1 year ago

Great coverage, but the subtitle... like subbing 500 meter to 500 yards, thats just not the same

by Jello Qq 1 year ago

by Ray Mak 1 year ago

So educating! I speak Cantonese and realized how much i still gotta learn. I always wondered what happened and now ik. Also great english

by silverthorn 1 year ago

As a Puerto Rican, this hits hard. Good interview!

by Deli Sandwitch 1 year ago

Shoots a journalist. This just got real.. Respect to the journalist staying and exposing this

by Life Progress 1 year ago

One thing I don't like most modern media is that they are looking for conflicts, provoking conflicts, expending conflicts and benefited from conflicts.
Politicians, who with seats or on the street, turn all problems to blaming games and then medias consume it.


I saw longer videos showing same journalist at the beginning of the video shouting to police: "Do it! Do it! Shoot! Shoot!" And now only see 'You shoot journalist!' But I just don't see the recorded scene showing they're shooting a journalist.


I saw videos that 'protesters' surrounding isolated unarmed polices and bit them on ground. But those videos won't be in regular search result at all.


Two groups of political parties spent months in the building just resulted most people don't know the details of the bill. People protest for liberty but all medias say that's for 'democracy'. Police says the number of protesters is a quarter but only the bigger number is used in media.


A bunch of extremist attacked the police. Later police made a decision to clear the area.


Then media have huge amount of 'resources' after.


Opposition politicians are so happy as they can see votes in future. Medias are happy as views keep going up.


The whole society is wasting resources on oppositions. Later on, who lost in the political conflicts will turn into victim of inequity and start a new blaming game.

by Indream Luo 1 year ago

would be great if you guys could do an update cuz im staying in mainland china and the recent news that i see theyre not just "protesters" anymore, more like "terrorist".

Man I love cantonese,hearing cantonese is music to my ears

by sozoshi shonen 1 year ago

I love this channel! Thank you Asian Boss!

by lol lolz 1 year ago

by JAGE MIDU 1 year ago

Canada - The best coverage I've seen of the Hongkong protest. As a westerner, I am inundated with propaganda from CNN, MSNBC etc making it difficult to stay informed. Well done !

by Colin T 1 year ago

A new version of this pls! Ask again after so many things have happened.

Property price drop in Hongkong is actually a good thing

by chinan san 1 year ago